The Ultimate Guide of Flotation Reagent

Defination: Flotation reagent usually refers to a group of mining chemicals used to adjust the floatability of minerals in mineral froth flotation process, which can artificially increase the difference in wettability between various minerals, thereby achieving the separation of useful minerals and gangue minerals.

The flotation reagent is mainly classified into three types:

Since most of the minerals in nature are hydrophilic, in order to achieve the purpose of mineral separation, it is necessary to artificially adjust the flotation behavior of ore. By adding flotation reagent, the concentrators can selectively increase the hydrophobic or hydrophilic of certain minerals, and cause the difference in wettability between different minerals, so that the useful minerals selectively adhere to the bubbles of the slurry and float to the surface of the slurry, and then be scraped off with the scraper to realize the enrichment of concentrate. The use of flotation reagent is currently the most flexible, effective, and convenient method of controlling flotation process.

Use the table of contents below to navigate through the guide:

Flotation Reagent Principles
back to top

The main function of the flotation collectors is to change the hydrophilicity of the mineral surface, enhance its hydrophobicity, and increase the adhesion of the mineral on the bubble, which can make it floatable and shorten the induction time.

Since most of the minerals in nature are hydrophilic, the flotation collector is widely used in flotation operations as a kind of flotation reagent. Generally, it can be divided into polar collectors and non-polar collectors. The commonly used collectors for flotation are mainly xanthate ,dithiophosphate and thiocarbanilide, etc.

The main function of the flotation frothers is to promote the formation of uniform bubbles and enhance the elasticity of the surface of the bubble. It can also make the bubbles generated by flotation more stable and not easily deformed. Even when subjected to vibration or other external force, bubbles are less likely to rupture. In addition, the stability of the foam is also affected by the pH of the pulp, the soluble salt content, etc. The commonly used flotation frothers are mainly pine oil ,methyl isobutyl carbinol (MIBC) and so on.

The main function of the flotation conditioners is to adjust the interaction between the collector and the mineral, adjust the pH of the slurry, and promote or inhibit the floatability of the mineral. According to the effect of the conditioners, it can be divided into the following categories:

pH modifiers: It is mainly used to adjust the pH value of the slurry, control the surface characteristics of the mineral and the chemical composition of the slurry to achieve the conditions required for flotation. Commonly used pH modifiers are lime, sodium carbonate, sulfuric acid and sodium hydroxide, etc.

Activators: It is mainly used to enhance the floatability of minerals, change the composition of the mineral surface, and enhance the effect of the flotation collectors. The non-floating minerals can float under the action of the activators. Among the flotation reagents, commonly used activators for flotation are sulfuric acid, sulfurous acid, sodium sulfide, copper sulfate and so on.

Inhibitors: It is mainly used to increase the hydrophilicity of minerals and to form a hydrophilic film on the surface of the ore particles. At the same time, it inhibits the action of the collectors on the mineral and reduces the floatability of the mineral. Among the flotation reagents, commonly used inhibitors for flotation are sodium thioglycolate, sodium sulfide, sodium silicate and sodium cyanide.

Dispersants: It is mainly used to prevent the aggregation of fine-grained minerals and make them in a monomer state. The particles can be easily wetted in the medium while remaining in a dispersed state. Commonly used dispersants mainly include sodium silicate and phosphate. 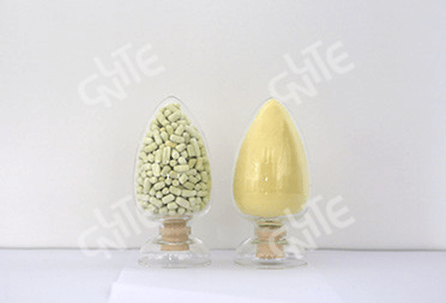 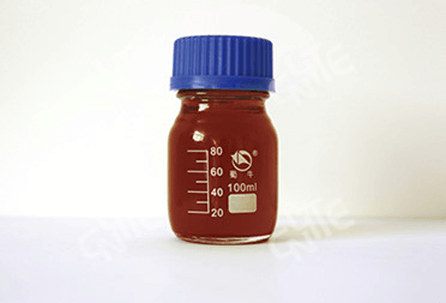 Flotation Reagent Dosage
back to top

If the inhibitors is insufficient, the content of impurities in concentrate will increase; if the inhibitor is excessive, the mineral which should be floated will be inhibited and the flotation recovery rate will be reduced. 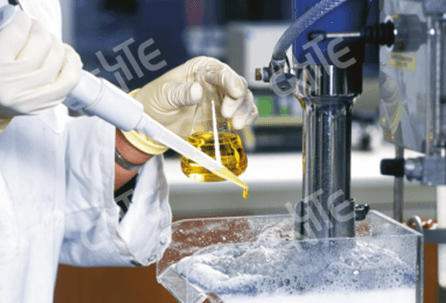 For some flotation reagents that are insoluble or poorly soluble in water, a good preparing method is to dissolve them into some special solvent before use. For example, CS(NHC6H5)2 is insoluble in water, but is soluble in an aniline solution with a concentration of 10% to 20%. So it can be used after it is formulated into an aniline mixed solution.

3. Formulating the Flotation Reagent into Emulsion or Suspension

For some non-soluble solid flotation reagents, it can be formulated into an emulsion. For example, the solubility of lime in water is very small. We can grind the lime into powder, and add water to make it into a milky suspension (such as calcium hydroxide). Or it can be directly added to the ball mill as dry powder.

For fatty acid collectors, saponification is the most common method. In order to improve the water solubility of the mixed flotation reagent, we can add about 10% of sodium carbonate to saponify the tall oil and heat the mixture with hot water to prepare a hot soap liquid when preparing the flotation reagent.

5. Adding as the Original Solution

Some flotation reagents (such as pine oil, dithiophosphate 25, kerosene, etc.) have very low water solubility, and it is difficult to formulate a true solution or a stable emulsion. Instead of formulating it into a solution, it can be directly added into the ore pulp according to the dosage. 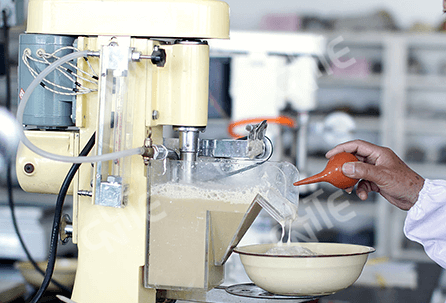 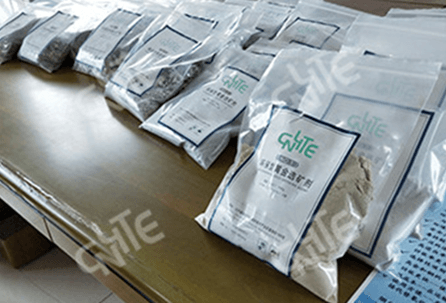 Add flotation reagents like flotation conditioners, inhibitors and part of flotation collectors to the ball mill to create a suitable flotation environment as early as possible. 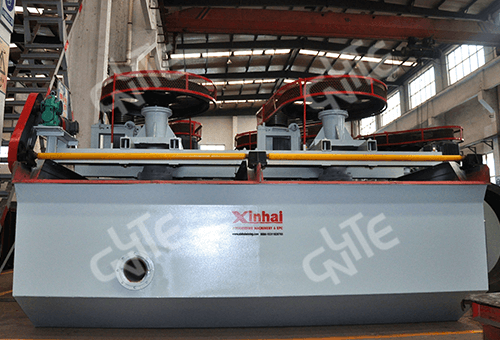 In actual production, the adding order of flotation reagents is generally:

The way in which flotation reagents are added is usually divided into one-time additions and phased additions.

The flotation reagents that are difficult to dissolve in water and are easily carried away by mechanical foam, such as oleic acid and fatty amine collectors, which require phased additions to ensure their effectiveness.

The flotation reagents that are easily decomposed during the reaction with the slurry, such as carbon dioxide and sulfur dioxide. If it is added only once, it will soon be ineffective with the reaction of the slurry, so it is necessary to add in batches to achieve the effect of continuous reaction. 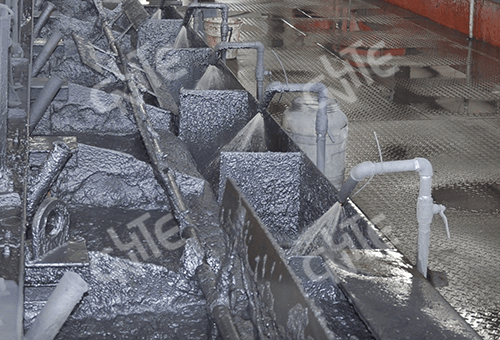 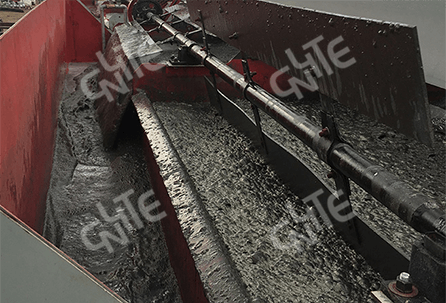 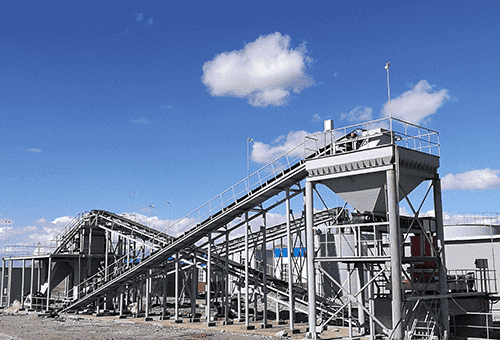 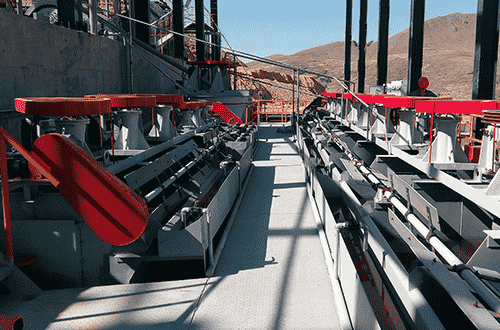