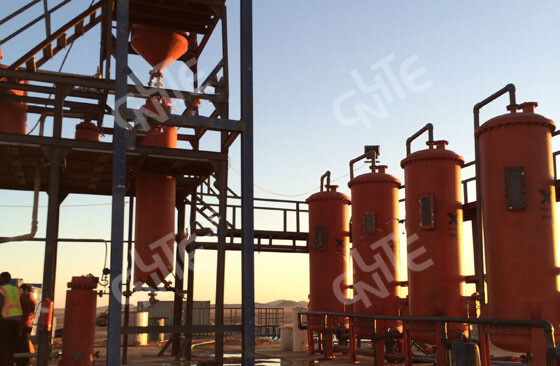 After the preparatory stage prior to the completion of the separating, the gold in the ore is dissolved with an oxygenated cyanide solution. The two main chemicals used in the leaching process are cyanides such as sodium cyanide, potassium cyanide, and protection of alkali such as lime.

● Concentration and filtration of cyanide pulp;

● Washing the filter residue on the filter with de-gold depleted liquid or water;

● In order to obtain sufficient separation between the cyanide leachate and the leach residue, a 3-5 stage dense-filtration or two mixed washing process is generally employed. When the processed ore contains less harmful cyanide impurities, all the lean liquid can be returned to the leaching operation. At this time, clean water is generally used as the washing water, which can improve the washing efficiency and make the cyanide tailings. The concentration of sodium cyanide in the solution is reduced, the loss of sodium cyanide is reduced, and the sewage treatment operation is simplified.

The principle of zinc replacement gold is to add metal zinc to the pregnant solution after purification and deoxidation. After the displacement reaction, the gold in the solution is replaced by a metal state and precipitated, and the zinc is dissolved in the alkaline cyanide solution. The reaction is rapid and the replacement is complete. Its reaction formula is as follows:

The residual metal in the precipitated gold mud is removed by pickling to ensure high-grade gold mud with a gold content of 30% or more. In the CCD process of smelting the ingot, the solution of the finally obtained gold mud is smelted and slag at a furnace temperature of 1000-1100 ° C for about 3 hours according to a certain ratio, and a gold ingot having a gold content of 95% or more is obtained. The solvent ratio is 30-40% of borax, 25% of nitrate, 15-20% of quartz sand, 5-10% of fluorite, and soda, manganese oxide and so on.