How to Prepare Flotation Reagent? 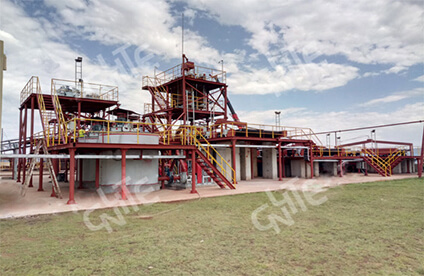 At the production field, in order to prepare the solution more conveniently, we can engrave a scale with a marked volume on the dispensing tank. Then we can add a known amount of flotation reagent therein and add water till it reaches the scale mark. After stirring the flotation reagent to mix and completely soluble, we can use it.

For some flotation agents that are insoluble or poorly soluble in water, they can be dissolved in a special solvent and added.

Formulating the Flotation Reagent into Emulsion or Suspension

For some non-soluble solid flotation reagents, it can be formulated into an emulsion. For example, the solubility of lime in water is very small. We can grind the lime into a powder, and add water to make it into a milky suspension (such as Calcium hydroxide). Or it can be directly added to the ball mill as dry powder.

For fatty acid collectors, saponification is the most common method. For example, during the flotation of hematite, paraffin soap oxidated and tall oil are often used as collectors. In order to improve the water solubility of the mixed flotation reagent, when preparing the flotation agent, we can add about 10% of sodium carbonate to saponify the tall oil and heat the mixture with hot water to prepare a hot soap liquid.

After emulsification, the degree of dispersion of the fatty acid collector and diesel in the pulp will be enhanced, thereby improving its effect.

Emulsification is usually carried out by means of ultrasonic waves, steaming or mechanical agitation. If a part of the emulsifier is added, the emulsification effect will be better. Many kinds of surfactant can be used as emulsifiers. For example, tail oil and diesel oil can be emulsified by adding an emulsifier alkyl aryl sulfonate in water.

For cationic collector (amines), we usually use acidification method. Since the cationic collector is poor in water solubility, it must be pretreated with hydrochloric acid or acetic acid to form ammonium salt, so it can be dissolved in water and used in flotation process.

Adding as the Original Solution

Some flotation reagents (such as pine oil, dithiophosphate 25, kerosene, etc.) have very low water solubility, and it is difficult to formulate a true solution or a stable emulsion. Instead of formulating it into a solution, it can be directly added into the ore pulp according to the dosage.

In summary, the selection of flotation reagent preparation methods mainly has the following principles:

(1) Flotation reagent that is soluble in water generally using the method of formulating into an aqueous solution. Such as xanthate, copper sulfate, water glass and so on.

(3) For some non-soluble solid flotation reagents, it can be formulated into an emulsion or suspension. For example, lime can be ground and added with water to form a suspension.

(6)Some flotation reagents (such as pine oil, dithiophosphate 25, kerosene, etc.) have very low water solubility and can be added directly to the stock solution.

The above are the nine methods for the preparation of flotation reagents. In practice, it is necessary to select the preparation method suitable for the production situation of the mineral processing plant according to the actual situation and the suggestions of the technicians to achieve the best flotation effect.