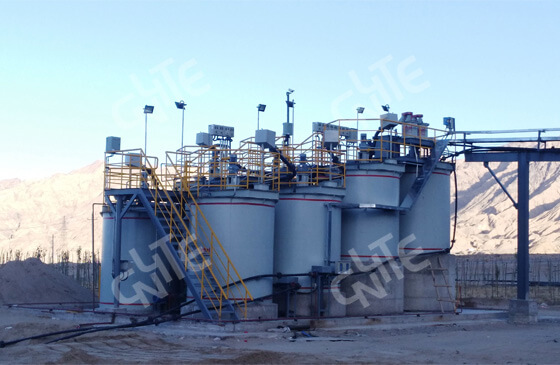 At the national academic conference on new technologies and products for gold (non-ferrous metal) mining, David, the mine’s chief engineer, described such a case and analyzed the optimization of the gold recovery cyanide process for refactory gold mines. It became a guideline for the refactory gold ore dressing plant that using gold recovery cyanide process.

After the underflow solid-liquid separation equipment of the pickling thickener was replaced with a KS5-45 full-automatic ceramic filter, the moisture of the pickling residue was controlled, and the labor intensity and operating cost were greatly reduced.

Changing the backwash water of the ceramic filter to backwash gas can not only ensure the backwash pressure of about 0.1MPa, but also reduce the consumption of the filter element.

In gold recovery cyanide process, when the concentration of leaching cyanide is controlled at 1500 mg / L to 1800 mg / L, the cyanide concentration of noble liquid is 1000 mg / L to 1200 mg / L, and the pH value is about 10, which is good for zinc powder of gold replacement. In order to achieve such an index, the engineer David said that the detection accuracy can be improved by standardizing the detection method for gold in lean liquids; zinc powder replacement posts can adjust the zinc powder addition speed in time based on the test results. Through the exploration of many years of production practice, the main technical indicators of the gold recovery cyanide process have been optimized year by year, and the consumption of main materials has been reduced year by year.