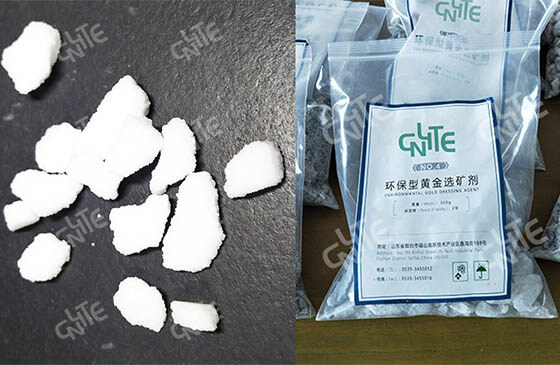 What is Gold Cyanidation Process?

Cyanidation is an economical and simple method of extracting gold from raw ore, concentrate or tailings and even extract gold from industrial waste. A hydrometallurgical process in which cyanide selectively dissolves gold from a gold-containing material in an alkaline slurry or solution in the presence of an oxidant to separate gold from other metal minerals and gangue.

Cyanide leaching is a process in which solid natural gold in ore or beneficiation product forms a gold-cyanide complex dissolved in water under the combined action of a leaching agent, an oxidizing agent and a base, that is, a phase transformation process of solid phase gold. Chemical reaction formula for gold leaching: 4Au+8KCN+2H2O→4KAu(CN)2+4KOH.

In short, the cyanidation process is to dissolve the gold in the ore through cyanide, then adsorb it through activated carbon, use electrowinning, become gold mud, and finally get the gold bar.

Why not Cyanide Sodium?

One of the biggest problem of gold cyanidation process is it will cause strict environment pollution. The state has a variety of environmental protection policies, and has strict requirements for the treatment of wastewater, leaching of gold waste, and waste slag. The use of cyanide will cause lots of problem. And some countries have banned on using cyanide to extract gold. So is there anything else that can extract gold instead of cyanide? In fact, there are many chemicals that can replace cyanide. The most widely used is the new environmentally friendly gold leaching reagent. Some gold mining plants have been applied, and the effect is good.

What is Eco-friendly Gold Leaching Agent?

What’s the Differences Between Cyanide and Eco-friendly Gold Leaching Agent?

With same other cyanide leaching conditions, the research focused on the difference of the leaching agent dosage, leaching rate, gold adsorption rate when using NaCN or CNLITE as the leaching reagent, and also carried out the economic benefit analysis of the comparable projects as the followings.

Nowadays, more than 80% gold mines in the world use gold cyanidation process, while 85% of them use sodium cyanide to extract gold. However, cyanide is a highly poisonous and dangerous chemical, and many accidents in transportation, storage and usage will result in serious consequences. Therefore, many countries and states have explicitly banned or restricted the use of sodium cyanide in gold extraction and the global gold extraction industry urgently needs an environmental gold leaching agent that can completely replace cyanide. So using CNLITE gold leaching agent to replace cyanide is a good choice.