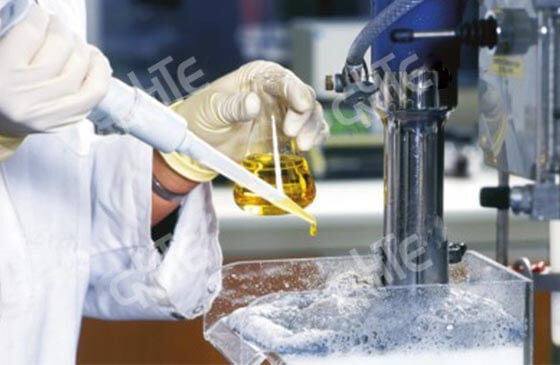 Dithiophosphate was first used in 1925, and it is widely used in the flotation of sulfide minerals, second only to xanthate. In addition to its collecting properties, it also has foaming properties.

The acid dithiophosphate is insoluble in water, but is soluble in an organic solvent such as aniline. In addition, the ammonium and sodium salts of the dithiophosphate can be dissolved in water to form a turbid liquid which can be added to the flotation process directly.

Dithiophosphate 25 can only be slightly soluble in water, so it must be added to the ball mill or the adjustment tank in its original form.

The ammonium aibutyl dithiophosphate has stable flotation stability and good selectivity, and is an excellent collector and foaming agent for non-ferrous metal ore. It has special separating effect on copper, lead, silver and activated zinc sulfide ore and hard-to-separate polymetallic ore. It can also be used for flotation of nickel and antimony sulfide ore, especially for hard-to-separate nickel sulfide ore, the sulfide-oxide mixed nickel ore and the middlings of sulfide ore and gangue. In the weakly alkaline ore pulp, ammonium aibutyl dithiophosphate has a relatively poor collecting ability to the pyrite and pyrrhotite ore, while has a stronger ability to collect galena.

Dithiophosphate is widely used in flotation process, but not all of ores can be separated by dithiophosphate. In actual production, the staff of flotation plant should combine the actual conditions, the results of the ore processing test, the recommendations of the technical staff and the content above to choose a proper flotation reagent to get the best flotation effect.